I once watched a television show in which they were showing how optical illusions affected children, most noticeably those who were crawling. In one experiment they put the child on a table. Both ends were opaque with large red and white squares and were connected by a piece of clear glass. The table was on a checkered floor, also red and white but with smaller squares making it seem much further away than it was. Even though the child could feel the glass and could rest its weight on it, yet the child refused to cross the glass. Even when shown it was safe, still the child would not cross. The illusion of distance became an insurmountable barrier.

With time and patience, by being shown it is possible, eventually the child will learn to cross the glass, to trust its senses and know there is a way across even if it cannot see it.

I am no longer a baby, toddler, or child. Yet in many ways this is a lesson I have had to relearn. To once again trust my thoughts, emotions, and senses. To understand, even when I cannot see or understand how, there is a way across.

I have reached a decision point, the edge of the known where I have been for so long. It isn’t comfortable or even desirable to stay but in order to move beyond this requires a leap of faith, an embracing of the unknown and trusting the glass will hold my weight. I don’t know what is waiting for me on the other side. I know what I hope is there. What I wish to find, but I will never know unless I take one more step forward.

I have seen others who have crossed the glass, who are crossing even as you read this. I have seen their stumbling steps, those moments of uncertainty and fear. I have also watched others overcome the fear and move onward. They are waiting for me even now. They have spoken words of encouragement, they have shown what is possible.

I spoke with A when I got home from work. I told her of my fears. I told her how much it hurt me to know I have hurt her and knowing I will do so again before this is over.

I didn’t cry, though I wanted to. She asked me not to, if I broke down she would have too. Maybe there will come a time for those tears in the future.

We both agreed I cannot stop here. I cannot go back. To do either would be more than I could bear. There is only forward from here. As she told me, I have to do what I must and of course, to take baby steps. There is still o a long way to travel yet and no need to rush. I will get there when it is time for me to do so.

For the moment I am going to work on being myself on the weekends, as long as possible each day. I will work on the things I need to get right every day for when I go full time. You see, I know it is only a matter of when, not if. I think I have known this for a long time even if I couldn’t make myself accept the truth.

There were other things of which we spoke, yet the most important is this;

Either of us could have walked away before now and yet we are still here. We are still facing this together and I think it says a great deal about our relationship.

8 thoughts on “Crossing The Glass” 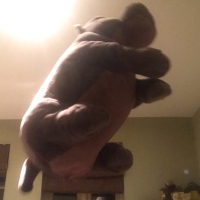